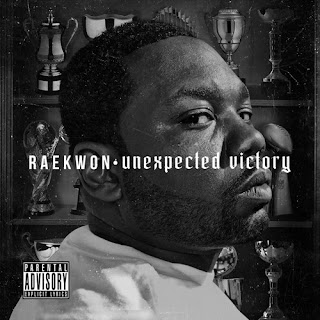 is the lone true solo joint. 9th Wonder works up a wondrously alluring concoction of soul samples and spotless snares because that’s what 9th Wonder does. The Chef appropriately soils it immediately with a grimy, IMAX-ready crime tale seemingly without exposition; seemingly too gritty for such a pristine soundscape because that’s what The Chef does. “Swollen eyes / His face was pulverized,” raps Raekwon. / Tryna be a hustler / 2 ounces / He wanna mobilize / Dumb dummy.” You can almost smell the beat down through the Bose speakers. It’s that detailed. It’s that quintessential on all fronts. And on this project, it’s the joint that fist-pumps loudest as if to exclaim, “Yes, Yes, this is a Raekwon release!”
In essence, "UnExpected Victory" is a cross-generational collaboration project. The remaining 15 crew love-smothered tracks (excluding “Intro’s” opening instrumental) is ultimately the unexpected victory. Where Rae, CL Smooth, and Sauce Money take hustling to the next level on the Scram Jones-produced “Silk” - a place where warlords are determined by their quest for peace and bookkeepers are within arm’s reach - “Chupa Cabra”

and “Luxury Rap,” respectively. Only “Luxury Rap” is compelling enough keep from reaching for the skip button.
Rae's Ice H2O roster is easily "UnExpected Victory’s" biggest winner. Reason absolutely owns “The Brewery’s” (produced by Scram Jones) riotous amalgamation of bass lines and background chants andJD Era attacks all four of his appearances (“Just A Toast,” “Goodfellas,” “Soldier Story,” and “Gangsta Cazals”) as if the industry went Delonte West on his moms. His verse on “Solider Story” is a statement maker, brimming with perspective and maximizing Pro Logic & Moss‘ awesomely layered piano keys and hi-hats:
“I’m writing to give you more of me / There’s more to see / More than petty wars and monotonous beef / I’m more than meets the eye / I’m the eye of the beast / So keep eyeing me too long and get your eyelids beat...I got sick of chasing stars with spacious cars / Like, ‘Take this / Tape of ours / And don’t take no bars’ / Hopin they’d / Take it abroad / It’ll play so hard / That I could replace my broad and replace my job / I prayed to God / Grant me whatever I deserve / ‘Cause I don’t wanna grow to be Legend Of The Curb / But / Believe in it and it will come / Aye this a dedication to the real ones."
If only "UnExpected Victory’s" production was as impressive as the cross-generational dopeness going down on the mic. If only “That Good Good” (featuring Altrina Renee, produced by Scram Jones & Blickstreet) and “This Shit Hard” (produced by The Olympicks) didn’t sound so elementary next to “A Pinebox Story” or “Soldiers Story." If only as much effort was put into mixing and mastering the project so that “The Brewery” didn’t blast in shockingly louder than “Just A Toast” (or so “Black Dust’s” sonic details were anywhere near distinguishable) as was put into finalizing features, then The Chef’s latest might’ve avoided any glaring holes in replay value.
The emcees showed up; the engineers and producers showed up less often. Even with that, considering Raekwon improbably relinquished the reigns to a staggering 21 different artists and 15 different producers - saving only one joint for himself - and still compiled a quality listen, he absolutely came away clean. A victory after all is still a victory, unexpected or otherwise.
Posted by DJ NEW ERA at 1/06/2012 06:56:00 AM