Mixtape Review (Cam'Ron And Vado) Boss Of All Bosses 3 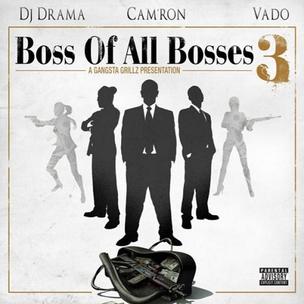 It’s impossible to ignore the foreboding opening to Cam’Ron and Vado’s DJ Drama-hosted, Boss Of All Bosses 3. Over “B.O.A.B. 3.0 Intro’s” typically generic, synth injected sound bed polluted with those irritating sirens that have unfortunately become the default for the masses of imagination lacking club DJs, Cam’Ron illogically rambles about the lack of gratitude in the game today. “People don’t say thank you no more, nah mean,” he says. “Yankees can’t play without Yankee Stadium. The Lakers can’t play without the Staples Center. Giants and Jets can’t play without the Meadowlands, you feel me?” He sounds serious, as if the Lakers didn’t once call the L.A. Forum home; as if none of these teams ever play away games. It’s nonsensical audio trash signaling the oncoming hour and twelve minutes of near lyrical uselessness.
“I was the first to wear 30 chains at one time,” raps Cam on “Not Us,” painting a ridiculous caricature of the Harlem-hustler decked out in 1980s era Mr. T bling-blaow. “I sell music and movies / Best Buy,” he raps seven tracks later on “Laying You Down,” dropping a suspect hash-tagged bar two-years removed from relevancy. For the better part of a decade, Cam’Ron’s chosen to flex swag over substance, substituting ingenuity-laced albums like S.D.E. and Come Home With Me for shallow tales of a kingpin lifestyle. But in a year where rhymes about Hublots and Margielas raised the roof on unabashed materialism, lines like “No I’m not Elvis but on my feet / Blue suede” (“Never In A Million”) are not only flaccid, but seem extraordinarily middle class. If bragging about balling is the mission, then at least push the boundaries; at least put in the effort to make it sound interesting.
All is not woe, though. Cam at least kicks enough basketball/NBA analogies to create a compelling drinking game. “Shout out to Memphis / I stay on my Grizzly,” (Drink!). “The one D. Fisher and Phil Jack caught / No forwards / Just fly dudes in the backcourt,” (Drink!). And Vado’s rugged, applause-worthy delivery comes correct throughout B.O.A.B. 3 - never more so than over “Talk My Nigga’s” double-timed, hand-clapping minimalistic brilliance.
The duality between Cam’s slippery flow and V-A-D-O’s straight-to-the-grill realness feels like an apt pick-and-roll on shallow listen (that’s a good thing), and the album is loaded with enough whip-ready stock anthemicness to hype any smoke-filled foray down the FDR. At its best, B.O.A.B. 3 is a narrow listen - passable in the car, passable in the club, passable if hearing something new from Cam and Vado is the primary objective. But with 20 tracks of platitudes focused less on progression, completely distracted by yesteryear’s depictions of success - by second listen - all that remains are fond memories of back-in-the-day when Cam’Ron cared about style andsubstance.
Posted by DJ NEW ERA at 12/26/2011 08:14:00 AM